In January in Amman in Jordan I met 12 year old Ibrahim in a rehabilitation center. Ibrahim was badly wounded by a barrel bomb one year ago in Syria. In the same air strike he lost his mum, one sister, three brothers and five cousins. His dad was elsewhere the day the bombs killed his family in the village, where they were hiding and now Ibrahim and his dad is together in Amman.

Pieces from the barrel bomb took seven centimeter of Ibrahims bone in his left leg. The week after I meet him in the rehabilitation center, he and his dad was going to Canada, where they got asylum. In Canada Ibrahim is going to have professional surgery for his leg.

But Ibrahim didn’t want to go to Canada and it has meant a lot of persuasion from his dad and the staff in the rehabilitation center to make him go. He misses Syria and all he wants is to go back to his war-torn country.

-One day I will become a journalist, and I will go back home and tell the world the truth about this war. I want to be the youngest journalist in Syria, he told me.

Mutahar and Muhtasham are from Afghanistan, but now they live in a refugee camp in Athen, and I met them just before I left for Denmark. Not to stay in the camp all the time they often go with their mum and dad to a park or to the beach to play. They have stayed for three month in this camp, and they are just so fed up with the macaroni, the Greek military mostly serves for them. Their dad have used all his money on the human trafickers to get to Europe, but when he sometimes happen to get some money, he buys cans of tun to mix with the macaroni.

In Afghanistan they were not poor. Their mum and dad had a job, and they had a house and a big family.

But one night some unknown men assaulted their dad with brass knuckles, because he was an actor in a TV series about womens right. They disfigured his face and said: Next time we kill you. Their dad had to flee from Afghanistan, first to Dubai, but though he had a job there, he could not get a work permit, and he returned to Kabul and the whole family went on this dangerous journey to Europe.

They crossed deserts and they climbed mountains.

All the way his dad told Mutahar that when they came to Europe, he had to go to school. When they reached the coast of Turkey and was able to look towards Europe, Mutahar had big holes in his shoes after all the walking. But luckily his mum saw a pink shoe lying in the bush next to where they were hiding from the police. And so Mutahar came to Europe with a blue and a pink shoe on his feet.

When they came to Athen, the Europeans had closed their borders with barbed wire for people from Afghanistan, and the family was unable to go to Sweden, where an uncle lives. So that’s why they live in a refugee camp in Athen.

Now their dad might get a job in Athen, because he is very good in English, and they might even get a flat, and they will never ever eat macaroni again. That’s for sure. Never, ever.

Here is an interview with the family, where they tell their story. https://kimmie53.com/category/greece/ 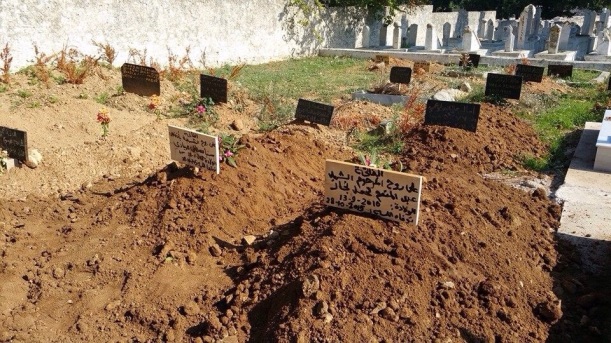 The three Syrian women in november at my hotel Mira Mare on Leros. Each of them had just lost a child in the sea, when I met them – and the old man who lost his beloved wife. They are in the reception. The TV runs with the news. Suddenly pictures from the accident. The Greek coastguard trying to save people from drowning. Dead children floating around in the water.

The mothers start crying again, but nobody is thinking of turning off the television. Fatimah (anonymously name) dressed in turgouise turns her face against the wall, the other women and the old man trapped by the television, unable to escape the grisly sight. Fatimah repeats again and again, as she did in the morgue: It is my fault, my daughter is dead.

All night the mourning outside my room. A tall slender woman dressed in black talks on the mobile phone with her husband in Sweden. She talks with a loud shrill voice. Then she cries. Talk again and cry.

The next day the son of the old man arrives from Sweden. Where is his mother going to be buried? And the three children? The families want them transported to Syria, but that will cost a lot of money, which they do not have. All the dead ends up being buried on Leros.

The families want the world to see, what is happening and at that time, we shared the pictures of the dead children in sympathy. 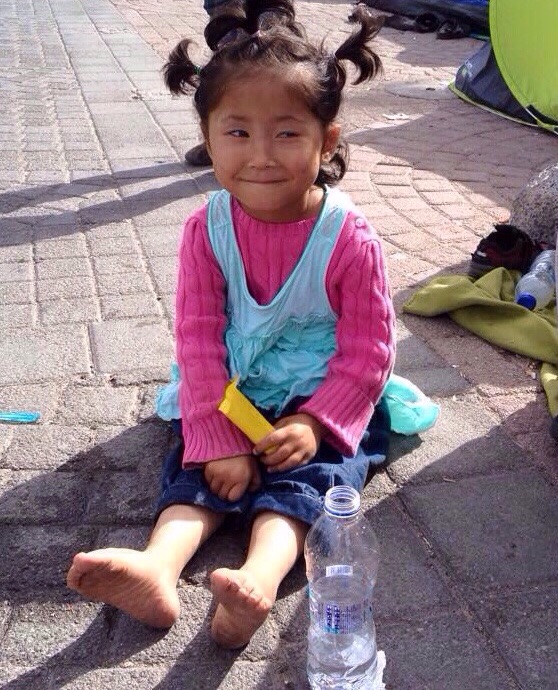 This charming girl I met in the beginning of my journey, in October at the quay in Kos city. She is from Afghanistan, and one morning, when I came down to the quay with all the small tents, she was just sitting there with her whole family among all the other refugees. She had arrived the same night onboard a crowded rubber boat from Turkey.

Her and her family had just survived a long and dangerous journey to reach Europe. With human traffickers they had been going through Afghanistan, Iran and Turkey in old cars, in buses and they had climbed steep mountains. Through the mountains her dad was carrying her old grandmother at his back, and her mother carried the baby. She herself had to walk. Now she is tired and hungry, but still able to smile.
Before she can continue her journey to the mainland of Europe, she has to get registered with the police on Kos.
Meanwhile her mother is struggling with her smallest sister. On the three weeks journey the smugglers only gave them bread and water to eat, and her mum have no more milk for the baby. The baby is starving and she only wants to be breastfeeded. She does not want the milk filled up with water in the bottle, UNHCR have given her mum. So now she is just screaming hysterically like babies do, when they don’t understand, what is going on.
Wonder where this little girl and her big family are now? 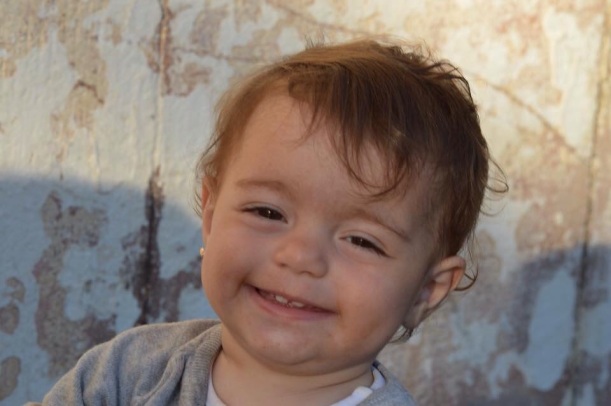 This little happy boy I met on the Greek Island of Leros in November.
Together with his grandparents and his sister he was just sitting there in the refugeecamp smiling with his two teeth. They were fleeing the war in Iraq.
First he made it all the way through Turkey. Then he survived the dangerous voyage in a small robberboat across the Aegansea together with 50 other refugees, and then he landed in the middle of the night on the military Island of Farmakonisi.
The Greek military was slow, they did not come to pick him up, and he had to stay on Farmakonisi for several days together with 500 other refugees. All the time more and more people landed on the Island and in the end it got quite crowded with refugees on the rocks, and it was freezing cold in the night. The soldiers on the Farmakonisi gave him a packet of biscuits every day to eat and some water, and he survived, though he in between was crying of hunger.

After three days of waiting, sleeping on the rocks a big militaryship came and picked up him and his family and all the other refugees in order to bring them to Leros. His grandpa had his stiff leg, and he was a bit slow entering the ship on the steep landing, so the soldiers shouted at him, and lifted the gun, as if they wanted to hit him.
Everybody were scared. Nobody bothered to tell them, where they were going, but luckily he was too young to feel the fear of the unknown.
On Leros he arrived in the refugeecamp – an old school and here he lived on a blanket in the schoolyard together with his grandpa and his beloved teapot for five days, before they were able to continue their journey.

This was before Europe closed its borders for the refugees. I wonder where this little boy is today?

There are many flashbacks at the moment from the past half year.

This is todays flashback from port Pireaus, Athen.

The boy – who at that moment had lived with his family in the tent behind for one and a half month – came to show me all his toys, having it all in the small red backpack.

The girl just came – needing a bit of care.

I wonder of they still live under these miserable conditions in Port Pireaus?

Now stucked in Greece the small boys father wanted to go back to Kurdistan, but he had heard that the turkish police would arrest him and his family and put them to prison for two years, if they returned. So he did not dare going back. Now he did not know what to do.