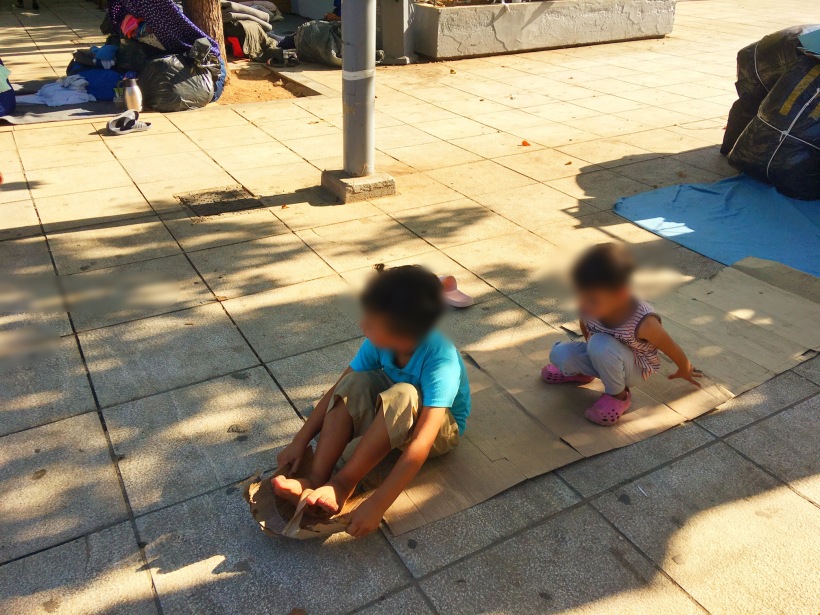 Homeless refugee families living on the streets of Athens

A baby so tiny and beautiful on her mother’s lap. The eyes are closed. Maybe she is dreaming. Beautiful dreams of a cradle with ruffles in a white sunny room. Far away from the dirty piece of cardboard and the gray UNHCR blanket that has become her part of life. We are in Victoria Square, a square in the middle of Athens. Once again filled up with refugees who have nowhere else to go. In March 2016, they lived here in the hundreds, if not thousands, when Macedonia suddenly closed its border and put a plug in the way for refugees and migrants way up through Europe.

As then, it is also Afghans who live here now. Everywhere children and adults, women and men, young and old, babies and women with another child in the womb, luggage and suitcases, backpacks and plasticbags, stacked on top of each other and up a tree or railing.

I ask the mother how old her baby is. Her dress is more gray than black – of dust. She looks up at me without understanding and I use my fingers. Then she raises ten in the air. A young woman arrives. She explains in English that the baby is ten days old.

We need a house to live in, she then says and asks if I can show her some pages on the internet where they can find a place to live. It is hot under the scorching sun and the blue mask brought from Denmark makes it difficult to breathe. None of the refugees around me are wearing masks. Or access to wash their hands, not to mention the small luxurious bottle of rubbing alcohol in my bag.

Had it not been for COVID-19 I would have sat down on the rug and talked with the women. Now we stand and I show her pages on Facebook with rooms and apartments for rent.

Before we move on, the family gets five diapers for each of the slightly older children. English Anne has diapers in the right size for a baby.

Today there are more than 30 families here. It is nine in the morning and not everyone has woken up yet. It is mostly the men who are still asleep. What do they really have to wake up to?

When they left the Morial Camp on the island of Lesbos with a small card as proof that they had now been granted asylum in Greece, they were promised a place to live and a job, if only they went to Athens. Every morning new families arrive by ferry in Piraeus. Many end up here in Victoria Square. At least the Afghan families. On Lesbos, they have heard of Victoria Square and the metro goes directly to here. Occasionally the police arrive and make a raid. People are driven away in buses and unloaded in piles in an already crowded refugee camp outside Athens.

Moria camp on Lesbos is overcrowded. With space for 5,000, there are now 13,000 living under miserable conditions. The Greeks are doing what they can to prevent more from coming. The country can no longer cope. The last many months they have started with the illegal push-backs. The overcrowded dinghies are pushed back into Turkish waters and human lives are at risk.

The Greek government decided once in the spring that it was no longer responsible for ensuring that people with asylum also had a place to live. 10-12000 people suddenly had to leave the camps or apartments where they had lived so far. And they were deprived of the small amount they were paid to live on each month. Now they had to fend for themselves. In an already unemployment plagued Greece.

A few nights later I’m back in Victoria Square. There are even more people sitting with sad looks at cardboard pieces and UNHCR blankets. And more luggage. There are only a few vacancies left in the square, and the Greeks rush past without looking. They have enough to think about. The country is close to armed conflict with Turkey and on television they are urged to buy canned food and prepare for war. Then there is also the Corona.

The cafees close to the refugees have no customers. Maybe it’s the fear of Corona. Some of the Afghans on the site have been tested positive and transferred to solitary confinement in a camp. Maybe it’s the stench of dirt. When I get home, there is a post on Facebook that the Morial Camp on Lesbos is on fire. The next morning, half of the camp burned down and 13,000 people are homeless. And later today I read that all the refugees at Victoria Square this morning were picked up by the police and driven in buses to camps outside Athen. 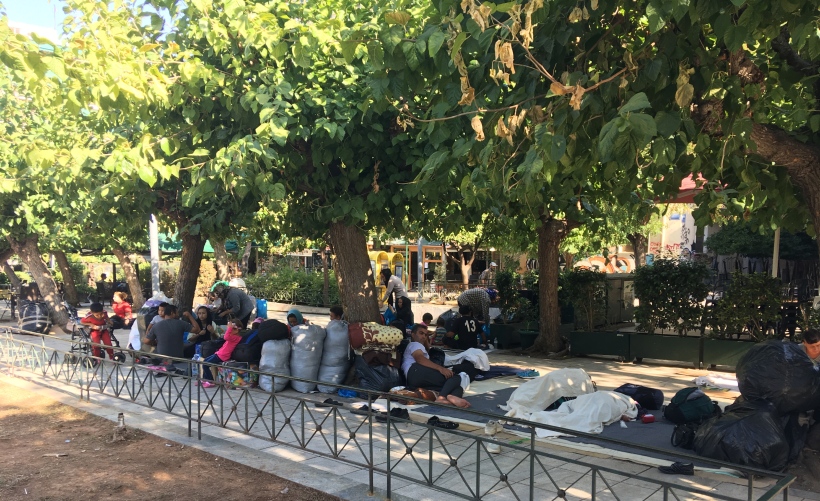